Chris Mantegna is a first-generation, non-traditional student, who is currently finishing her Marine Biology undergraduate degree at the University of Washington. She also serves on the board of directors of Black Women in Ecology, Evolution, and Marine Science (BWEEMS) as co-chair of the Outreach, Mentorship, Social Committee. We recently caught up with Chris to learn more about her and how she became involved with this fast-growing international organization.

Can you tell us a little bit about yourself?

I am originally from Baltimore, Maryland, where I lived until I joined the Navy when I was around 20. While in the Navy, I was a damage controlman, (shipboard firefighters who specialize in chemical, biological and radiological warfare). When I left the Navy in 2007 after seven years, my daughter was getting ready to start school. We were living in Richmond, Virginia, and I was a single parent, working two full-time jobs. I knew I wanted to go back to school, become a marine biologist, and raise my daughter Chloe in a progressive place like Washington. So, we sold everything that we could and went on a cross-country road trip to Seattle. When we moved here, we didn’t have any family or friends in the area—it was like hitting a huge reset button. In 2017, I went back to school part time at Green River Community College. I joined the Mathematics, Engineering, Science Achievement (MESA) group there, which is a community for underrepresented minorities in STEM fields. They helped me figure out how to navigate the system and how to apply and transfer to UW in 2019. This fall, I will be a graduate student at the School of Aquatic and Fishery Sciences in Steven Robert’s lab.

How did you get involved with BWEEMS?

I took Julia Parish’s class, FISH 305: Marine Science Writing and Trevor Branch was a guest speaker. He spoke about how Twitter is providing a ton of opportunities for underrepresented scientists, and I thought that was really cool. In my graduating class, I think there are only two of us that are Black, and there really should be a bigger community. So, I updated my old Twitter account and started to follow some scientists, and I immediately realized this was my space. Nikki Traylor-Knowles (BWEEMS President and CFO) sent out a Tweet in summer 2020, looking to connect with other Black women in marine science, saying, “I know we are out there,” and a bunch of people answered. It ended up on my Twitter page—it was awesome! This is community. In July 2020, we had our first Zoom meeting with about 50-to-70 people on call; every single Zoom box was another Black woman’s face saying, “this is what I do, this is how I do it, and this is where I am in the world.” It was one of the most reaffirming moments. It was also wildly helpful because we are in academia, consultancy, industry, NGOs, government—you name it—we are all over the place. I was able to build a network with a ton of mentors.

“Every single Zoom box was another Black woman’s face saying, “this is what I do, this is how I do it, and this is where I am in the world.” It was one of the most reaffirming moments.”

One problem I face as a non-traditional undergraduate student is that classmates are closer in age to my daughter than to me. Our life experiences are different, and building a community is very important. I realized that BWEEMS can be bigger and better and more than just a social group. Fortunately, Nikki and Karlisa Callwood (BWEEMS Vice President), feel the same way. In just six months, we went from a social group to an organization with NSF funding. There are nine board members, and we are all working for free; I’ve never gotten an organization off the ground before, and I’ve learned that it’s exhausting. 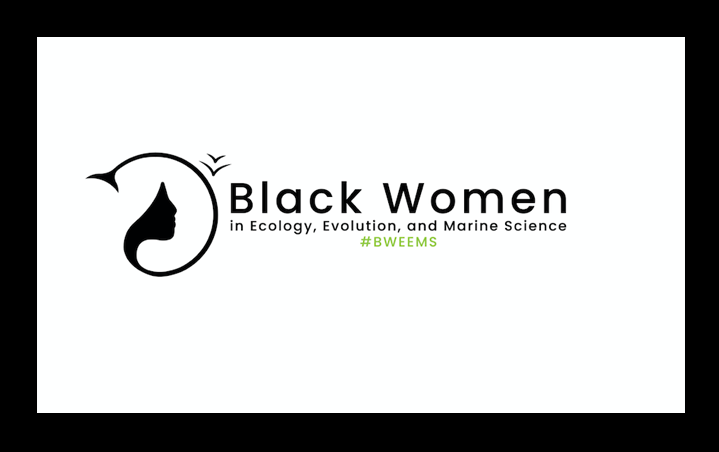 How did the pandemic play a role in connecting you all?

I think it was the perfect storm–the combination of the racial unrest over the summer and how all of us were desperate for community because of COVID. We just had to capitalize on it. Currently, we are 200-plus members strong, across the US and in several other countries, including Canada, Panama, Belize, France, and Brazil. There’s no way we could make it work if we had to do the meetings or programming in person.

Could you expand on how you see BWEEMS filling a void in STEM as well as the general under-representation of Black women in science?

The documentary Picture a Scientist uses a graph showing that only 2.2% of awarded PhDs in STEM go to Black women. That is a wild number considering Black women are enrolling in undergraduate programs at comparable rates to other demographics. If we’re stopping at the four-year degree, why is that? Some of it is debt, some of it is family and social responsibility, some of it is that we don’t know the path. I’m very fortunate that I am of an age where I’m very comfortable advocating for myself. Asking questions: How do I apply to graduate school? What do I do?—These are not paths that we know.

The thing about being Black women is that we’re not a monolith, there’s intersectionality. We have a lot of first-generation students, immigrants, and first-generation children of immigrants. We have a massive amount of overlap with other intersectionalities that tend to get pushed to the side when we’re trying to enter these big universities. The big marine science programs are at predominantly white institutions, and these are places that we don’t know how to navigate. Granted, there are exceptions to all the rules, and we have a lot of members who are legacy PhDs, but the vast majority are not. There’s a good chunk of us, like myself, who will be the first in our families to graduate from college. BWEEMS holds space for all of these intersectionalities so that we have the resources, support, and understanding to go through the process.

Most of us are the only (or one of the only) Black women in these programs, and that can be highly alienating, especially when you’re constantly code-switching. Navigating these spaces and hiding who you authentically are is exhausting. The way that I speak, the way that I interact, the way that I advocate for myself is usually deemed as aggressive or unprofessional. My hair was criminal in this state until last year. It’s exhausting to constantly sit in that space, and BWEEMS creates a space where we don’t have to worry about any of that. We can share our experiences: How do you deal with it? How does it happen? How do you let it go? How do you address some of the inequities? For the most part, people are operating from a space they just don’t understand.

“The big marine science programs are at predominantly white institutions, and these are places that we don’t know how to navigate.”

BWEEMS is helpful in trying to identify areas where we can help our classmates and our coworkers understand what parts of the system are actually perpetuating something that is not okay. An easy example is unpaid internships. It is a privilege to be able to do an unpaid internship. At BWEEMS, we only promote internships that are paid. Historically, unpaid internships exclude working families, immigrant families, and first-generation students. Anybody that has to work their way through college can’t do it; they don’t have the time. Then, when you don’t have that internship experience, you’re not as competitive at the next level.

Broadly, code-switching involves adjusting one’s style of speech, appearance, behavior, and expression in ways that will optimize the comfort of others in exchange for fair treatment, quality service, and employment opportunities. Research suggests that code-switching often occurs in spaces where negative stereotypes of black people run counter to what are considered “appropriate” behaviors and norms for a specific environment. Learn more

How does mentorship in BWEEMS work?

BWEEMS has some professional development programs for high school students, but the actual mentorship program is only BWEEMS members. Right now, we have 18 mentor/mentee pairs in our initial cohort, which will run for the year. Afterwards, we will debrief and provide feedback to see what worked and what can be translated into a larger program. It’s awesome! Mentorship is what drives me because if you don’t build the connections, everything you’re doing falls apart at some point; you need to have the network to support you so that you can move forward.

What can people do if they want to join, or if they’re an ally, how can they get involved to help with BWEEMS mission?

Join our mailing list by going to https://www.bweems.org/, follow us on social media, or you can donate, even $5 or $10 helps a lot. We have a list of speakers available, so if you want to diversify your panel for an upcoming event, you can find that information on the website as well. We also have panels that are just for members, but we record them and make them available to the public on our website. Because we are centering the voice of Black women in order to create an inclusive space, we do have some things that are just for Black women. But these issues don’t just belong to us—they just show up differently for us. We don’t want to alienate anybody; we want everybody to come hang out and see what we’re doing: we’re asking different questions, we’re doing different things.