Sea Pens: Light on the Seafloor 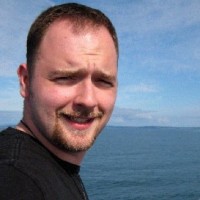 It’s easy to see where the orange sea pen gets its name. A soft-bodied invertebrate that lives on the ocean floor, sea pens look just like feathered quills once used for writing. And where there’s one sea pen, there are usually others – lots of them – all swaying in the ocean current gobbling up planktonic plants and animals as they drift by. They are pretty simple creatures, but they also possess a special ability shared with only a handful of other marine creatures – they are able to produce their own light, also known as ‘bioluminescence’.

It was an interest in bioluminescence that drew Aquatic and Fisheries Sciences senior Jonathan Allen to research the orange sea pen. He first studied bioluminescence in organisms in a course on hydrothermal vents – deep cracks in the ocean floor that emit superheated water – offered through the School of Oceanography (OCEAN 454). This interest led to a senior capstone project researching how or why the light generated by sea pens varies during the day or night.

“The mystery surrounding sea pens as well as other bioluminescent species fascinates me because it comes in so many different varieties and colors, and species use it for so many functions,” says Jonathan. “But largely we do not understand the purpose in many species. Some believe that bioluminescence is used to attract or “scare” away things that eat sea pens, but most of the species that prey on them do not rely on vision for finding prey. Bioluminescence is very energetically expensive to produce so it must be important to the animal in some way.”

Allen has been working with sea pens since July 2014 to find out if the production of a particular enzyme – Luciferas , which is necessary for sea pens to produce light – increases at night. To find out what’s involved with caring for live sea pens in a lab environment and see results from genetic sequencing of his samples, you can visit Jonathan’s Capstone Research Blog. He is still compiling his results, which will be presented as part of the SAFS Capstone Symposium at the end of this quarter. Jonathan plans to graduate from the UW at the end of autumn quarter 2015 with a Bachelor of Science with a Major in Aquatic & Fishery Science and a Minor in Marine Biology.

Quick Facts about the Sea Pen

Fun Fact: A sea pen is actually made up of a colony of polyps, like coral