Equipped with boots, headlamps, and multiple layers to stave off the cold January night, undergraduate students from the University of Washington’s SeaDawgs club explore a rocky beach on the edge of Puget Sound. Originally just a small gathering of about 20 club members tide-pooling, quickly grew and attracted over 40 students from a range of majors. Illuminated by a full moon, the students trekked up and down the shore inspecting tide pools teeming with creatures–from octopuses to sea stars–while also making new friends and connections. 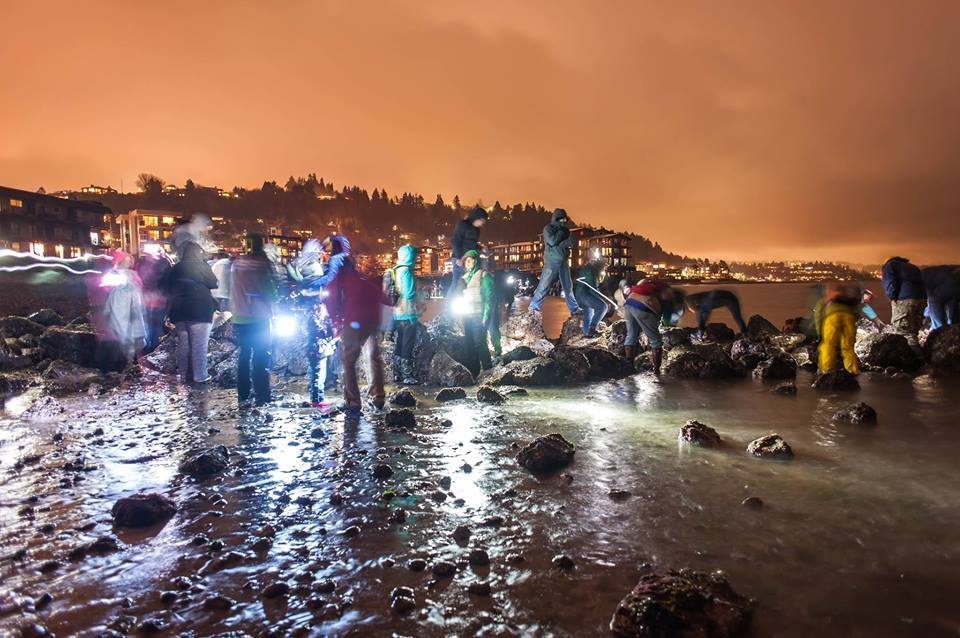 “It was really cool to see all the people tide-pooling and the range of their knowledge so we had people teaching each other that had just met seconds earlier,” said Duncan Greeley SeaDawgs Event Chair.

SeaDawgs is the official UW Marine Biology club open to all undergraduate students interested in marine environments, conservation issues, or just want to know more about the local wildlife in the Pacific Northwest. The group’s goal is to build a community of students who are passionate about marine science through social events, volunteer work, academic seminars and research, and other social projects. Club president Bailey Gilbert, a senior at the School of Aquatic and Fishery Sciences, along with the SeaDawgs team of officers, is leading somewhat of a resurgence for the longstanding club.

“The club started about eight or nine years ago, but the officer team this year has really brought it back from the brink of extinction,” Gilbert said. As president, she hopes to “encourage personal growth in all SeaDawgs officers and inspire countless SeaDawgs to dive deep into their love of the ocean no matter their background.”

The additional club’s officers are Aquatic and Fishery Science, Environmental Science and Terrestrial Resource Management (ESRM), and Dance majors. In their attempt to reach a broader audience, they are organizing more social events on campus, field trips, and networking opportunities for students. Some of these events include ocean themed Jeopardy, movie nights (featuring fan-favorite: The Life Aquatic with Steve Zissou), beach clean-ups, and the friendly competition of the annual SeaDawg Olympics.

“Last year we hosted Olympics in hope to give people a place to relax, but also have fun in a setting that you didn’t need any marine biology background to have fun,” said Gilbert. “This year we are hoping to make the event bigger and to reach even more people as we get ready to hand the executive board over to the next generation of SeaDawgs Officers.”

Bailey says she hopes to keep the SeaDawg’s momentum going after she graduates and that officers are now actively looking to pass the torch to a new set of student leaders.  The club is organizing times to where interested students can shadow officers and learn from them. The next date to participate is on May 6th at 5:00pm. If you’re interested in what officers do and how become one please email seadawgs@uw.edu.